Acoustic neuromas are complex conditions, and no two patients have the same needs. At the Vanderbilt Skull Base Center, we have been treating acoustic neuroma patients for more than 40 years. Our patients receive personalized care focused on the best possible outcome with the least invasive treatment.

Our Skull Base Center is a leading provider of acoustic neuroma surgery. Patients from around the country choose Vanderbilt because of our:

For more information about our approach to treatment, including answers to frequently asked questions about acoustic neuroma treatment at Vanderbilt Skull Base Center, visit our web site at www.VanderbiltSkullBase.com. To make an appointment, contact our patient care coordinator directly at (615) 936-4730.

Slow and Steady Wins the Race 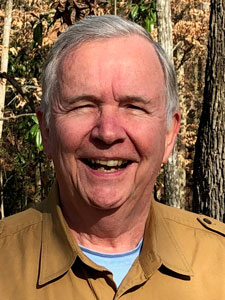 Until last summer, Henry Banks, then 70, had never spent a day of his life in a hospital. Overall, he was healthy and felt fine. Even some hearing loss in his left ear didn’t bother him too much.

“I thought it was normal, but then I started having numbness on the left side of my face,” Henry recalls now. “I decided it was time to go see a doctor.”

He made an appointment with a physician group in Georgia, where an MRI unveiled a 3cm mass growing behind Henry’s left ear. Henry contacted Destin Ledgerwood, the Skull Base Program Coordinator at Vanderbilt University Medical Center. He began to research institutions known for their work in this field. Henry learned that Vanderbilt surgeons routinely performed more than 100 similar surgeries every year.

The hurdle: VUMC was a six-hour drive away from his home in Columbus, Georgia. And because he was calling himself, Henry was considered a self-referral, which he worried would reduce his chances of getting evaluated for treatment. But his symptoms were worsening, and he was also experiencing some dizziness.

“It was a benign mass that I had, but it was growing,” Henry says.

Fortunately for Henry, he was able to meet with VUMC’s Reid Thompson, M.D., Director, Neurosurgical Oncology and Director, Vanderbilt Brain Tumor Center, and David Haynes, M.D., Chief of the Neurotology Division and Program Director, Neurotology Fellowship. Dr. Haynes and Dr. Thompson worked together with Destin to coordinate a series of sameday evaluations that didn’t require Henry to make the long drive back and forth. The surgeons took their time, talking to Henry and asking him questions. Finally, they all agreed that Henry needed an 11-hour surgery to remove the mass, which would otherwise continue to grow and put dangerous pressure on his brain stem.

Henry explains, “They have to move slowly because there are so many little nerve endings in that area that they have to deal with.” He adds with a laugh, “I told them, I’d rather have slow than speed. I don’t need speed. So go slow!’”

He credits the skill of Dr. Haynes, Dr. Thompson and the whole VUMC team for the successful surgery, noting that he didn’t wind up with any unfortunate side effects like nerve damage or facial paralysis. He still has the hearing loss that he’d already developed, but he’s working on adjusting to that in other ways.

“My overall experience was a positive one,” says Henry. “They know exactly what they’re doing. They did a good job.”

Life Back to Normal for Patient with Massive Brain Tumor

What if you were 53, in perfectly good health and started having balance issues? Miriam McMasters had never been ill and didn’t take any medications. Every year, she visited her primary care physician for a physical. Other than that, she never went to the doctor.

For most of 2016, McMasters noticed she was having trouble walking. She attributed it to age, but her balance kept getting progressively worse. By the end of the year, she was “teetering around”.

“It had gotten to the point that when I took a shower, I couldn’t close my eyes to wash my hair without being afraid of falling,” she explains.

Then she and her husband attended a 70th birthday party. “It was on a beautiful estate and it was outdoors; I just didn’t feel confident walking across the yard.”

A friend urged her to go to the doctor. “She kept saying, ‘You NEED to go check that out!’ McMasters waited until August for her annual physical.

“The nurse asked me a bunch of questions and I told her I had been feeling dizzy. When the doctor came in, he was reviewing my chart and when he got to the part about the dizziness, he looked up. I told him I’d lost confidence walking. I figured he’d probably tell me it was an inner ear thing.”

Miriam’s physician was concerned. Seven years earlier, his wife had had a brain tumor. He ordered an MRI, which revealed a tumor that took up over 25% of Miriam’s brain. “I wasn’t home 30 minutes when the doctor called and said, ‘I really don’t know how to tell you this, but you have a huge mass on your brain.”

By that time, he had already called the Huntsville neurosurgeon who had performed his wife’s surgery. He referred them to Reid Thompson, M.D., director of Vanderbilt Brain Tumor Center, for evaluation.

“We drove up and met with Dr. Thompson and while we were there, were also met with Dr. Alejandro Rivas,” says Miriam. Rivas is a neurotologist, specializing in complex head and neck surgeries. He consulted with Reid, and it was determined that surgery was the best treatment option. Three weeks later, Thompson and Rivas performed an eleven-hour procedure and removed the entire tumor.

Miriam’s tumor was a meningioma – a usually noncancerous tumor in the membranes surrounding the brain and spinal cord. Meningiomas are very slow growing and rarely life threatening. But they can be life altering, impacting hearing or facial nerves.

“Needless to say, that was a worrisome three weeks!” says Miriam. “I was in the ICU the first night and the nurse turned me over on my left side. I could still hear the TV! I knew then I would be all right.”