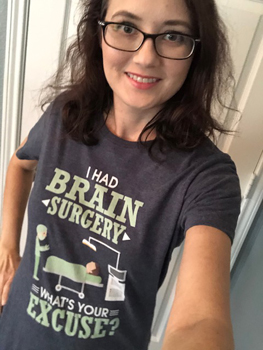 My AN Journey
Melanie Hok

A few years before my diagnosis, the only thing that would clue someone to the fact that something was wrong with me was the decreased hearing in my right ear. Otherwise I was fine.  When I realized that the hearing in my right ear was almost completely gone, I made an appointment with an ENT.  At my appointment an audiologist did a thorough hearing test and the ENT did a physical exam.   I was told I had unilateral hearing loss, which, according to the ENT, was uncommon, especially for someone my age (35).

My ENT thought something was blocking the nerve and wanted an MRI.  That's when my 3 cm tumor was discovered.  He wanted to make sure I knew the tumor was benign and referred me to the Acoustic Neuroma Association website for more information.

He also referred me to an otolaryngologist that specialized in acoustic neuromas and made an appointment for the next day.  That night I researched acoustic neuromas on the ANA website.  I learned that mine was considered large, found information about the types of surgeries and recoveries, and that second opinions were a must.  I also joined a Facebook group to get more information from people who had already been through it.  I wanted to see scars, hear recovery stories and understand what to expect immediately post-surgery.   Hearing from actual patients was extremely helpful.

I decided on a neurosurgeon near me because Houston has one of the best medical centers, including Memorial Herman, but I did get second opinions from an Acoustic Neuroma Center in Dallas.  They all agreed on the form of treatment, which put me at ease.

I had a retro-sigmoid craniotomy in September 2019, just three months after my diagnosis, which removed most of the tumor.  The neurosurgeon left a lot behind because it was wrapped around my facial nerve and he wanted to preserve my quality of life.  He also suggested that I have Gamma Knife to treat the remaining tumor which I had in December 2019.  Even though I had researched and asked a lot of questions about Gamma Knife, I wish I had known just how worn out I would be two days later.  I also wish I had known about painful facial muscle spasms six-months post-treatment.  I knew I might have swelling and some other side effects, I just didn't think they would be to that extent.

My recovery is ongoing. My neurosurgeon said it could take up to eighteen months for the nerves and muscles to "calm down." I am currently ten months out, so I still have a bit to go.

I have had some fun celebrating milestones!  I’ve done a photo shoot and several months later, went to  France.  I had plans to celebrate at six months post-Gamma Knife, but the pandemic took the wind out of that sail.  It has also been interesting trying to do follow-up appointments during the pandemic.  I have video calls with my doctors and try my best to describe symptoms. Wearing a mask in an MRI machine makes one feel even more trapped.

I still have to take it easy. If I get jiggled around a little too much, the next day will be bad. However, most days are good! I can drive again, do most chores and play with my two young boys, ages five and three.  I just have to tell them to take it easy - one kick to the head and I'm in bed with an ice pack!

I’ve noticed that the tumor affects mostly people in their 50’s. I wanted to share my story because I've noticed that the age range is vast.  The youngest person in one of the Facebook groups is nine!  People closer to my age and a little younger worry about their young kids understanding. Fortunately, I can share that children are resilient and understand more than you think.