Getting Back in the Game 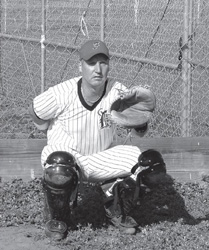 Getting Back in the Game
Kurtis Lau

While in college, I led an active lifestyle, working out, playing various sports, and participating in a baseball league. I was having some difficulty hearing certain words and a hearing test revealed mild hearing loss in my left ear. The doctor chalked this up to me working in a loud automobile factory — the job that supported me through school, and listening to loud music.

Several years later, when a girlfriend became frustrated that I could not hear her, a test revealed 50% hearing loss on the left side. It was not until a few years later that my health took a serious turn for the worse.
While playing in a church basketball league, I was getting dizzy when making sudden moves toward the basket. Spinning suddenly while running made me dizzy; shaking my head after a shower made me light-headed. I was encouraged by my buddies to “get my head examined,” which I did.
My primary care doctor did not like what he was seeing and referred me to an ENT, who scheduled an MRI. The doctor called me quickly afterwards and asked me to come into the office, where he showed me the MRI film. It was obvious even to me — a large, white mass that was displacing the brainstem — a 4 x 5 cm acoustic neuroma. His opinion was that it needed to come out as soon as possible.
All of the stages of disbelief, shock, denial, and acceptance ran their course over the next few weeks. What to do? Where to start? With the internet in its infancy, I relied on friends, family and my church to assist in finding a course of action.
Ultimately my choice was to have Dr. Brackmann and Dr. Gianotta at House Clinic perform perform translab surgery. The operation took more than 12 ½ hours, but the doctors were able to excise the entire tumor, and with monitoring, left my facial nerve intact! I was up and moving in a day or so, and even shot some baskets with my brother up on the rooftop court of the hospital.
After surgery, I had facial palsy for a few months, but with time and exercises, my facial nerve recovered, and I now have 70% of a smile again. My eye specialist, Dr. Levine of Los Angeles, performed an eye “lift” outpatient surgery, which helped with my eye closure problem. I use drops still, especially in the evening before bed.
My limitations are few. I cannot tell where someone is when they are talking to me from a distance. I occasionally have tinnitus, which has increased in the past few years. Hearing highpitched tones is difficult, so female voices present a challenge. Lastly, when playing sports, I have difficulty catching fly balls or pop-ups in baseball and hitting overhead shots in tennis.
As a teacher and coach, I let students and athletes know about my condition and talk to teams on the field or court in close proximity.
I am in a good place now. Although it has been 22 years since my journey began, I am doing all of the things-and more-than before surgery. I belong to a travel club, lift weights, play golf, tennis, baseball, officiate both basketball and baseball games and play the violin.
I am active in my local church and do not let my hearing loss limit possibilities for my future. During my journey I was able to cope with the help of family and friends and my church family praying for me. If it weren’t for them and my faith in God, I do not know how I would have gotten through.
My advice for others is to rely on the Acoustic Neuroma Association to steer you in the right direction and give you information about making an educated choice for your AN situation. Don’t rely on just the internet. Take advantage of the ANA ANetwork list of volunteers who are willing to talk-and ask a lot of questions! The folks on that list have ‘been there, done that’ and want to help!
Finally, have a support system in place. Having a spouse, significant other, family or close friends, will pay huge dividends in your journey. Your self-esteem will improve greatly, and coping and recovery after treatment will be much easier with the help of supportive people around you.
Recently, I had the opportunity to speak at my ANA Support Group meeting to encourage other AN patients to “be all that they can be.” My title for this presentation is, “Don’t sit on the sidelines, get back in the game!”