What I Learned About Happiness from Acoustic Neuroma Surgery 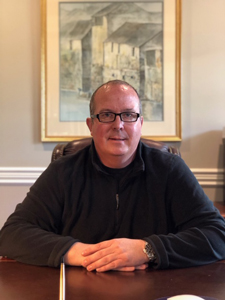 What I Learned About Happiness from Acoustic Neuroma Surgery
Brian Bouchard

Since late November/December 2018, I felt something was seriously wrong with me, but I just couldn’t place it. In March, I told my wife Rebecca that I felt like I was dying. She asked what would make me say that. I told her that I couldn’t medically put my finger on why I would state such a drastic claim, but I just felt like my body was shutting down. She replied that we are all dying, but somehow I knew this was different. – Oh boy, were we about to find out how different!

I told this story to my Primary Care Physician a few days before my surgery on May 15. He was not at all surprised by my comments, and went on to tell me that the human brain often knows there’s something seriously wrong with the body well before a formal medical diagnosis is made.

On Saturday, April 20th the incredible migraines and eye pressure that would come and go since late November 2018 would not stop. It got so bad that by 4:30 am, I was in my car driving to the Mass Eye & Ear Infirmary in Boston. I was fully expecting to be back home by noon after I was prescribed pain medication for my “sinus headaches”. I was astonished when my sinuses looked so clear to the attending physician that he ordered a brain scan to see if there was something else going on.

Shortly after the CT scan was read, the attending physician told me that there was an indication of a “large brain mass” on the scan. As such, he was going to email the Massachusetts General Hospital emergency department next door, and that they would receive me in their emergency room right now. I was going to have an MRI with contrast, a chest x-ray and then I was going to meet with an MGH neurologist. As a nurse from the Mass Eye and Ear Infirmary arrived with a wheelchair to escort me to the MGH emergency room, I could tell that this was getting very serious. I politely refused the wheelchair, and was escorted to the MGH emergency room under my own power.

By 1:00 pm, various doctors in the Critical Decision Unit of MGH were asking me to “make a plan.” As I awaited a bed opening in neurology ICU, MGH surgeons began scheduling my brain surgery for Monday, April 22, 2019 (the day after Easter). The first medical diagnosis was that my 4.2 cm brain tumor was malignant, and the MGH Neurological Surgical Team wanted it out ASAP.

In the meantime, Rebecca brought our two young children, Ethan 14, and Natalie 11, via train from Rhode Island to meet me in the Critical Decision Unit of MGH. We were either all going home in one car as a family, or we were preparing for surgery. Everything was very much up in the air on that Saturday before Easter.

Later that afternoon, the surgical team reached consensus that due to its size and location, the tumor was likely a benign acoustic neuroma that had been growing in my brain for as long as two to three decades. Upon receiving this updated diagnosis, I was allowed to get dressed and return home.

Whew! I felt like at least I now had some time to take control and prepare – and I did!

I write this on the late evening of May 20, 2019, after spending five post-surgical nights in the MGH Neurology ICU. It is also exactly one month since my initial diagnosis.

This has been the craziest month of my life. Approximately 95% of the acoustic neuroma has been removed from the nerves near my brain stem, as well as some CSF. My brain now has room to expand without pushing dangerously against the brain stem.  Remarkably, the nerves in my tongue and face have already come back as well.

One bad side effect from acoustic neuroma surgery is that I am essentially deaf on the right side of my body. As such, I’m asking everyone to please look directly at me when speaking to me from now on – Please know that if I do not see you, it’s very probable that I also can’t hear you.

People say these events are life changing. The good thing I learned is there isn’t much I’d change with the limited time I thought I had left except one dinner reservation. That’s pretty cool.

Every day for the past two weeks leading up to the surgery, I’d ask myself these two honest questions:
1.) What’s the best use of my time?
2.) If this were my last night on earth, what would I rather do?

Only on the night before surgery did I ever change plans. Instead of going to dinner at a new French Restaurant near MGH, I made a dinner reservation for Rebecca and me at “Top of the Hub” – which I had not been to since the mid 90’s – when I was a kid living and working in Boston.

Tuesday, May 14th 2019, was a peaceful but odd night for me at Top of the Hub. As Rebecca and I were enjoying a five-course meal overlooking Boston, I couldn’t help thinking of the 12 to 15-hour surgery, the anesthesia, possible complications, etc.

As we made our way back to the hotel, and set our alarms for early the next day, a quiet peacefulness came over me. I had a great night’s sleep and I awoke ready to take on the day.

The next morning, Rebecca and I walked to the MGH surgical waiting area together and began the ordeal.

What I Have Learned Medically

* The importance of joining an Association or Group such as the Acoustic Neuroma Association that specializes in the specific care you need to research. Reach out to members via phone or email. Read their testimonials. Ask members about their specific situations, and which treatment options they considered. Ask why members chose certain surgeons to do their surgery or why they received treatment at a specific facility. Common themes such as surgeon names, medical facilities, and procedures will begin to appear as you dig deeper and become informed.

* Become an Expert - Understand all the latest procedures available, and the skilled surgeons required for a specific surgery. It’s your job to do your homework on the surgery being recommended, and to consider all options.

* Interview the Surgeon - Don’t be intimidated – How many patients has your surgeon performed surgery on with acoustic neuroma brain tumors this size, and larger? What were their results?

* Understand the Process: How/Why are you being recommended certain surgeons?  – Is it because they are truly the best at this particular procedure, or is it because they are in a rotation and the next patient behind you in the queue with the same diagnosis would be assigned to a different surgical team?

* Listen to Your Body. My tumor took two to three decades to become so large! There were misses along the way. I was not listening.

It has always been vital to Rebecca and me that our children understand the incredible importance that optimism, gratitude and actively choosing happiness can bring to one’s life.

We have always believed that happiness is simply a choice in life. If anything, this experience has deepened our long held beliefs on how to live a happy life: