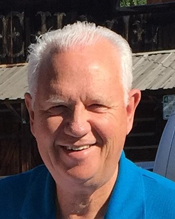 My balance had always been pretty good. As a dedicated fly fisherman, crossing a raging creek on a fallen log or wading in a swiftly flowing river was a piece of cake. And as a square dancer, I was pretty nimble and coordinated for a 70-year old guy.

Then, in 2013, my friend and I decided to fly fish in the Snake River in Idaho. As I made my way into the river I began staggering around, trying to navigate the underwater rocks. I moved toward a rising trout but stumbled,falling into the chilly water. After being swept downstream for about ten feet, I regained my footing and looked sheepishly at my friend, who was suppressing a chuckle at my little mis-adventure. Two days later, I noticed a pretty red rock in the shallow water. I bent over to pick it up, lost my balance, and pitched face first into the river. The result was a nice cool bath on a hot day.

After returning from the trip, I was concerned enough to schedule a visit with my GP, who referred me to a neurologist. When he brought up my MRI on the monitor, there was a glowing white circle, about the size of a grape (8 x 7 mm). The diagnosis explained the loss of balance I had been exhibiting. I could still hear out of both ears, and audio tests proved my word recognition in both ears was quite good.

My initial reaction to the AN diagnosis was: “to get that rascal out” of my brain and I was eager to get on with it. The neurotologist told me my AN was considered small, and that I actually had three options. The first was surgery. He felt that the AN could be removed with an 85% chance of preserving my hearing using the middle fossa approach. Other options included radiosurgery and “watch and wait”. The decision was mine. I was convinced that I was in good hands and scheduled the surgery for a month later.

After some online research, I joined the Acoustic Neuroma Association (ANA) which sent me some excellent and much-needed information. It was written in plain English the average person could understand.

Another excellent online resource was the ANA Discussion Forum which allowed me to share my concerns and feelings about my newly diagnosed condition. The Forum has many stories from other AN patients who describe their trials and tribulations as they grappled with their AN. Many were so supportive of the battle we were all facing, it was very uplifting.

After reading many of the stories on the Forum, and learning more about the possible side effects of surgery, I decided to further explore my options. I liked the fact that radiosurgery would be non-invasive. I decided to cancel my surgery and scheduled radiosurgery instead.

While waiting, I continued researching AN’s and also joined the ANA Seattle Support Group. Being able to talk with other people suffering from AN’s was extremely valuable.

As the time for my radiosurgery approached, the radiation oncologist indicated that there was some probability that the hearing in my affected ear would be impacted by the radiation due to the close proximity of my cochlea to the AN. Since I still had some hearing in my left ear, I now began to reevaluate my choice of radiosurgery. Good hearing is essential to square dancing, and I had also been taking physical therapy to deal with my balance issues. The PT had improved it significantly.

About that time, an article appeared in the June, 2014 issue of the ANA Notes newsletter, detailing the results of a study that concluded that taking a daily baby aspirin pill may be effective at inhibiting AN tumor growth so I started on a daily regimen of one baby aspirin.

I took stock of my situation. I still had some hearing, my balance was improving with PT, my MRI’s indicated slow or no growth, and I had no other debilitating symptoms. I decided to forego radiosurgery for the time being and move to the “W & W” category, with annual MRI’s to monitor tumor growth.

Although I think my balance has very slowly worsened since then, I have been happy with this decision.

Did the baby aspirin regimen cause my AN to decrease by 31% in one year? I don’t think anyone knows for certain, but I think others should consider it.

I was also supported by a lot of uplifting prayers from my family and friends, which I believe was also instrumental in the decrease. My fly-fishing days are over, but I can still square dance three or four times per week and enjoy the fun, exercise and fellowship of the dancing.