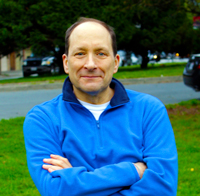 In 1989, I noticed that the dial tone on my phone was not the same pitch in each ear despite perfect hearing. I saw an ENT who did the standard hearing and balance tests, all of which were normal. However, an MRI revealed a 1.0 cm acoustic neuroma. It also revealed a second benign brain tumor, a meningioma. Because meningiomas frequently require no treatment, I was advised to watch the meningioma but decide what I wanted to do about the AN.

I began exploring my options. I decided to have the AN removed rather than watch and wait because of my professional plans as a dermatologist. I was planning to leave the HMO medical group where I practiced and accept an offer to start a private practice with an established dermatologist. But, before leaving the HMO practice, I wanted to be sure I would be okay to continue to practice. So I proceeded with the surgery.

I selected a neurosurgeon in a different city. The tumor was removed with a middle fossa surgical approach. The surgeon felt he had removed the entire tumor even though the post-operative MRI revealed a small dot at the internal auditory canal. He thought the dot was just a blood vessel and could be watched on subsequent MRIs. Two months later I returned to work, and a month thereafter I accepted the offer to start my own practice.

I continued to have regular followup MRIs. Two years after surgery, the “dot” was unchanged but the meningioma had begun to grow. I was advised to have it removed while it was still relatively small, so I had a second craniotomy to remove the meningioma. Then, within another two years the “dot” began to enlarge—the AN had recurred. My doctor and I decided to follow it rather than re-treating, hoping it would cease growing, but eventually it filled the entire internal auditory canal. When a very small portion began to grow out of the canal, the neurosurgeon who had removed it initially recommended repeat surgery, which I scheduled.

Before the scheduled surgery date, however, I had an appointment with the neurosurgeon at the nearby medical center who had been ordering the MRIs and following my case. After reviewing all the MRIs, he suggested I wait an additional nine months and repeat the MRI. Then, only if it continued to grow should I have surgery.

So, I had two well-known neurosurgeons suggesting completely opposite courses of actions. I, the individual with the least experience and knowledge, had to decide what to do. After lots of anxious contemplation, I decided I really did not want a third craniotomy, and if an experienced neurosurgeon thought it was safe to wait, I would do so. I cancelled the surgery. A few days later, the first neurosurgeon called to ask why I cancelled the surgery and encouraged me again to have it removed. It was a very difficult phone call, but I explained my decision and held firm.

The MRI nine months later showed no growth. Subsequently I have had MRIs every two years and the tumor has remained stable…until six years ago when the tumor started to shrink!

The neurosurgeon who suggested I defer surgery pending another MRI retired before that MRI was done, so he never knew the result. Then, fifteen years later, at a recent ANA support group meeting, I saw the name of the man who signed in just before me. It was that neurosurgeon! I was shocked. I introduced myself and gave him the follow up details of my case. He gave me a “high five” and we clapped hands high in the air. What a wonderful opportunity to thank him for his advice!