Flight Against All Odds 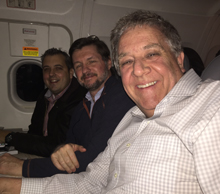 Flight Against All Odds
Rick Gaetano

On Thursday, Feb. 11, 2016, three men boarded a routine United Airlines flight from San Francisco to Raleigh, North Carolina. It is what they learned about each other over the duration of the flight that made this trip anything but routine.

As many readers of Notes may know, the incidence of acoustic neuroma is quite rare. So, if we told you there were three AN survivors sitting on the AIRBUS 320, you would understand this would be highly unlikely statistically. But, then to tell our readers that these three acoustic neuroma patients were randomly seated next to each other in Row 24, Seats A, B and C . . . you will quickly realize how amazing the coincidence was, considering the rare connection they shared.

The flight started like any other for the three men, who were sitting next to each other in the emergency exit row. Located on the aisle, was Brian Hamilton, an engineer from Northern California. He was seated next to a technology entrepreneur from Cary, North Carolina, Scott Woody. In the window seat next to Scott was Rick Gaetano, a Sales Director, also from Cary.

As the flight left the gate at San Francisco, the men began to make some small talk. During this conversation, Scott turned his body to the left towards Brian, who also turned in his seat towards Scott. Both had rearranged his position to better see and hear the words coming from the other. Scott got straight to the point. He said, while pointing to his ear, “I'm sorry, but I’m deaf in my right ear. About 14 months ago, I had a rare brain tumor called an acoustic neuroma.” Brian quickly smiled and tapped his wife Kathleen, who sitting across the aisle, saying to her, “You are not going to believe this honey, but this guy sitting next to me was also treated for an acoustic neuroma.”

Rick, who was returning from business meetings in San Francisco, was working on his computer when he heard this dialogue. He chimed in, “I don’t normally listen to others’ conversations — heck, I’ve only got one working ear anyway! But did I just hear you guys talking about acoustic neuromas? Guys, you may not believe this, but I had an acoustic neuroma removed at Duke University on December 13, 2013.” He laughed, “I am also deaf in my right ear! Looks like we have a full quorum for an ANA meeting!” All three laughed, shook hands and established a mini “brotherhood” of acoustic neuroma survivors.

Brian’s wife, Kathleen, later said that she enjoyed observing the trio sharing their experiences. “Brian has never had the opportunity to share his life experience of enduring the surgery, and the resulting consequence of deafness with another. When I heard all three of the men describing it to each other, and explaining how they each coped with it, it made my heart happy. All three had different surgeries with similar outcomes, and all three of them had different electronics to help deal with their hearing disability. Of the trio, Kathleen says, “You were all giddy with joy to have found each other. It was certainly my best eavesdropped conversation ever. With all your backgrounds, I'm still hoping you will invent a device that will make life easier for all AN patients, and the coincidence of three right-eared deaf AN survivors will indeed not be a futile coincidence.”

For the rest of the flight, the three men shared their stories — highlights, complications, lessons learned and living life after AN surgery.

They also joked that they should all play the lottery, as they believed the chances of winning the lottery are greater than the chances of three strangers, all AN patients, being seated together on one row of the same flight. They exchanged contact information, took a group photo and agreed that it was a “flight against all odds!”